Stay at home. Train your serve! 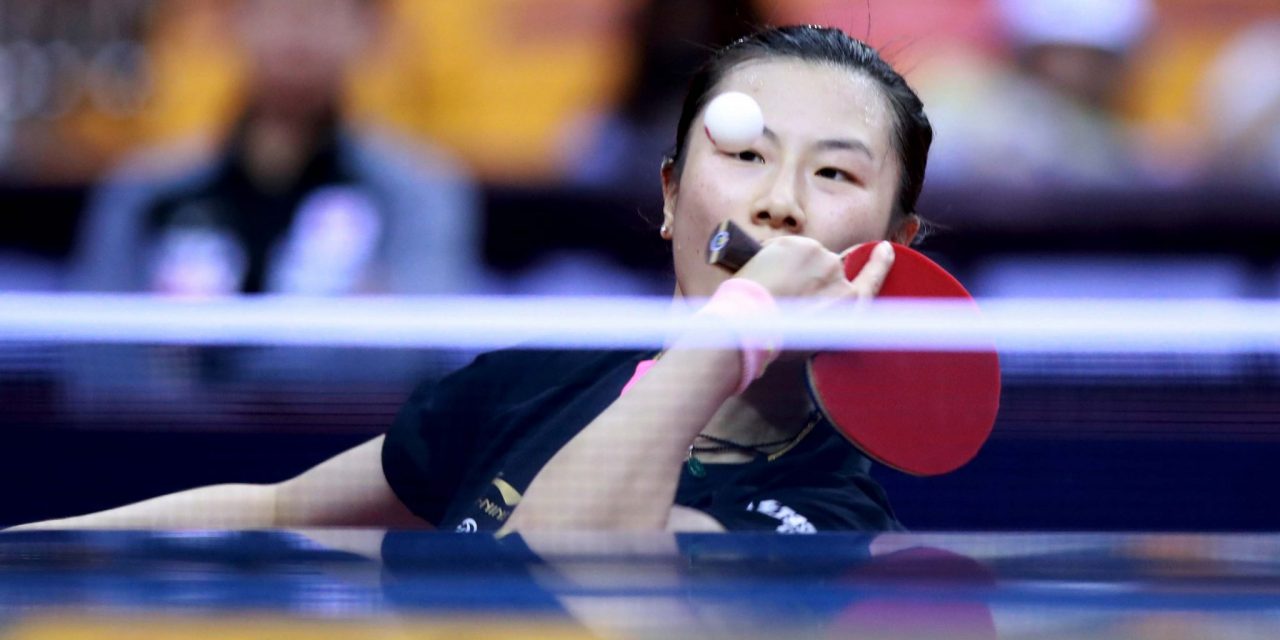 A little while ago, I wrote about a topic that has the taste of perpetual current affairs, “Train the Service”.

Now 12 years on, I would like to resume this topic in a period of absolute calm that, it seems, will last for a while; those who have a table tennis table at home have an excellent opportunity to use this time to improve one of the most essential qualities of table tennis, the service.

We will look at some of the statements I have made in this earlier article and see if they still apply.

“The service is an important phase of the game, perhaps the most important, because it determines its very progress, the game strategy.”

The concept remains very valid. If we take high level players and go down to the base, we can see how the service plays a preponderant role. It has in its DNA, the strong connotation of letting the serving player win the point both directly and from the sequence that comes out of it, the so-called “third ball”.

It is a universal desire. Everyone hopes to win the point immediately after the service; it is like a sort of psychological relief, as if someone were helping you to solve an urgent problem and, finally, like having a heavy burden removed.

“It’s a lively and dynamic piece of technical experience, never before has the player had the full possession of their skills. The characteristic of being lively and dynamic lies in the fact that the player has multiple variations in terms of rotation, speed, direction, position, depth and, unlike other shots, he is not influenced by anything except the athlete himself when he throws the ball”.

Nothing is more true. The service reveals a static and a dynamic situation at the same time, the very concept of an oxymoron.

It doesn’t matter in which moment of the competition the service is played: it is a special moment.

Everything and everyone is waiting for you to act in the most effective way. As a coach on the bench you have that inner storm of different expectations, such as the possibility of winning the point, the possibility that that service shows us the best way, indeed possibly the best shortcut, or a secondary road.

We can indicate the service as the best detective for our game; that is, able to investigate in those plots of the vulnerabilities of the opponent. Finally, there is also the fact that my thoughts as a coach and how I see the match can coincide exactly with the athlete’s thought, as if we were one.

How many times we say to ourselves, – my athlete should serve short with topspin and wait for the flick of the opponent and eventually win with a sudden attack on the body – and maybe that happens. It would be the total realisation of being of a coach, when two thinking minds merge together.

“The service brings with it various elements of a technical, tactical and psychological nature. On other occasions I have expressed the following definition: service is a state of mind. In fact, the psychological component, extremely present in table tennis, finds its maximum expression here, just think of those particularly delicate moments of the game such as, for example, the final moments of the games or of the match”.

Now I guess you understand why I started out talking about perpetual current events.

Imagine how many times you have found yourself in the situation of having to recover two points, maybe at a score of 8-10 and you can count on your arsenal of services. At very high levels we are now talking about perfect balance, even if many people think that the opponent has two game points or two match points.

I believe statistics support this fact. We need to make a quantum leap and consider the match as a big square where you can find many escape routes; not like being in a dead end. Therefore, a strong psychological balance related to self-confidence will enable the service to always be of help to your game.

Before analysing the service from a technical and tactical point of view, it is good to remember that the rules require the service to be performed correctly, otherwise sanctioned with a warning or worse with the allocation of the point to the opponent.”

Here we have a huge variety in how to cheat your opponent. Throw the ball back, so as to increase the power, raise the ball less than the legally required height (16cm) to make the action sudden, hide the ball with any part of the body (even with the face) so that the opponent cannot recognise the type and amount of spin imparted.

What is the common denominator of all these tricks?

Disorienting the opponent. Putting the adversary in a condition of objective handicap and then exploit the element of inability of others. It is extremely unfair, both from the point of view of rules and regulation and therefore punishable by the match officials; also from the ethical and behavioural point of view.

Personally, I am more inclined to consider the latter aspect: any sport and its athletes must always set an example of fairness and establish the concept of equal dignity of performance for any athlete. On that we do not compromise.

Saying that, it does not mean that a player must give up the possibility of disorienting the opponent. In fact, there is nothing preventing from disguising the service through technical skills, such as speed of execution, flexibility of the wrist and the power that can result from this small joint and other technical efforts.

When we talk about technical skills, one cannot but consider the trainability aspect of those skills. Since the service can only be influenced by the quality of the toss of the ball, it is natural to think that this action is the easiest one to train; indeed it is the situation.

The toss of the ball must be precise and without hesitation. A wrong throw could compromise its success. Particularly important is the moment of contact with the ball.

Many players tend to toss the ball well over 16cm, sometimes reaching peaks as high as 2-2.50m (since the early 70s, the masters in this type of throw were the Chinese), the goal is twofold: to extend the observation time to the opponent possibly distracting him and to exploit the speed of fall of the ball, combined with the speed of the technical gesture, makes the ball even more difficult to “be read”. So, in this way, when the racket touches the ball, the quality of service can be significantly improved”.

Remember Hungary’s Csilla Batorfi? Another one of the great players whose service was crucial for her career. Every player was so afraid to play against her with her killer service.

“The importance of the moment of contact is given by the speed with which you hit the ball, the faster the contact and the movement is rapid, the more difficult it will be to understand the type of spin from the opponent’s end. Whoever serves will try, as mentioned before, to confuse the opponent by inducing him to make a mistake or returning an easily playable ball.

If it is true that an opponent can be confused by quality (type of spin), it is equally true that the adversary can also be confused by quantity (rotation). But there is more. Hitting the ball quickly also allows you to send the ball unexpectedly to one part or another of the table; finally, last feature, give more or less depth to the ball”.

You may think things haven’t changed much – but they have! If 10-15 years ago you only served in a certain way, i.e., for a forehand serve from the backhand corner (right-handed) and vice versa (left-handed), the whole area of the table has become crucial for performing the service today.

Think of a player like China’s Xu Xin (left-handed) who sets himself up from the left side of the table, i.e., on the forehand side, to perform a pendulum reverse service with his forehand – that would have been unthinkable 15 years back. Today, many players find technical/tactical solutions using their own different positions at the table, which demonstrates the above, lively and dynamic.

There are two ways to train the service:

What is meant by contextual training? As the word itself says, I have to put my service in a context; this is followed by a specific movement.

Most of the players who train the service take care of analytical training. You can see this clearly in the venue. They throw the ball. They take the shot and go and repeat the same thing; this kind of repeated action is very good when you are not concerned if the ball goes long or a bit high over the net, this kind of training is very good to strength the quantity of the power to be impressed on the ball and the quality of the action itself.

One of the things that players should take more attention is not to consider this exercise as a pure quantity exercise, the more I do the better I become; this exercise requires focusing, precision, stability. Many players just take the ball, serve and take another ball and serve or even they hold numerous balls on the palm and serve like using a gun, as if service training was just a quantitative matter: nothing could be further from the truth.

Contextual training also includes the position or idea that follows that particular service; for example, for a fast long service, a long ball will follow and therefore the position to be taken need not necessarily be near the table, so the position for the third ball must be accordingly slightly back. Of course, there are several examples and each of you can imagine your own recurring actions. The next time you are in that position, try to remember these words, maybe you will be able to make one or two more points than usual, and believe me, one or two, are already many.

At last, I would like to take this opportunity to suggest studying table tennis.

How? The internet and technology come to your aid. Observe how the champions perform their service and what they do repeatedly after their serve. If you have some videos of your matches, watch them again and again, try to focus on your body or the opponent’s body, forget the ball, forget the rally and the score; just study and learn. Later you will be able to test your learnings and apply them to new challenges.

As usual, this is only a taste of service training and beyond, and you could write books on this topic. Maybe soon we will have more opportunities to talk about that.

I look forward to your comments at High Performance & Development. Stay safe and think Table Tennis.

For those of you celebrating: Happy Easter and Happy Passover!