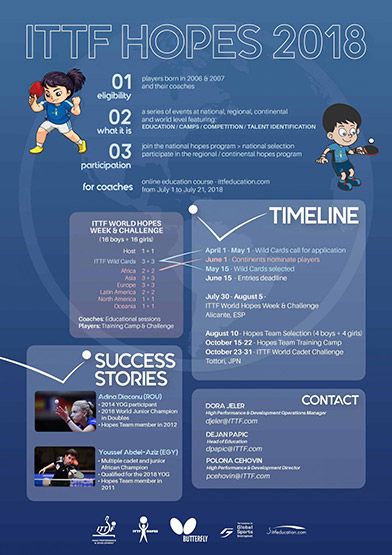 The ITTF 2018 Hopes season is in full swing, having kicked off early in September 2017 with the Latin America Continental Hopes Week in Paraguay.

The 2018 Hopes team for the World Cadet Challenge in Tottori, Japan, will be selected in August, at the ITTF World Hopes Week & Challenge in Alicante, Spain.

On their way to Spain, the Hopes will have the opportunity to attend many national, regional and continental training camps and tournaments, led by our experts.

Read on for the location and dates of the Hopes activities* (subject to change unless confirmed):

*(subject to change unless confirmed)